The main point of marketing is to get someone to buy your product or engage with your brand. But does that happen through manipulation or mutual agreement? Let’s take a look at how psychedelics can make marketing less evil.

The action or business of promoting and selling products or services, including market research and advertising.

Marketing gets a lot of bad press these days. A lot of that bad press is pretty fair when you consider marketing and consumer psychology is used to:

A marketer’s mindset can be far too focused on growth and hitting goals that they throw morals out of the door. Take this example of some lazy marketing – although, top marks on the Photoshop skills…

Although, the Photoshop skills here leave a lot to be desired…

As a marketer myself, these types of campaigns make me think, “what the hell am I doing in this job?” But, there’s a silver lining to all of this, as marketing can also be used for good.

There’s one tool that’s not talked about a lot that can help marketers be less evil. It’s not a new app or platform – it’s one of the oldest tools humans have to hand.

Before we dive into talking about psychedelics, let’s look at why marketing isn’t all bad.

“For me, marketing works for society when the marketer and consumer are both aware of what’s happening and are both satisfied with the ultimate outcome.”

As Seth Godin is very good at doing, he sums up the positivity of marketing in this neat sentence.

If you are genuinely delivering a product or service that helps individuals, the community or another business, then why not attract people to your business? The only way you’ll survive is by bringing customers through your door.

Thankfully, I’ve been able to live by this as a marketer for most of my career and have been fortunate enough to help:

How can psychedelics help you be a better marketer?

Let’s make it clear – you do not need to take psychedelics to have a moral compass and be good at marketing. However, it can help.

In many ways, marketing and psychedelics should go hand as with both you can try to:

Microdosing is one method used to help people be more creative, decrease depression and live a happier life.

Microdosing is taking an amount of a substance, such as LSD or magic mushrooms, that is so small it is subperceptual. In other words, you don’t feel high from it.

Whether microdosing works or not is debatable and given the illegal nature of microdosing, scientific studies are pretty hard to do.

However, a self-blinding study was created by Imperial College London and The Beckley Foundation, where participants recorded results themselves and anonymously gave feedback.

The effects of microdosing in that study weren’t overwhelming, but it did show an increase in positive psychological outcomes – a bonus in my book.

In the study. microdosing didn’t perform better than the placebo, randomly taken as part of the study.3

Placebo used to be a dirty word in society with phrases such as “it’s all in your mind” attached to it. Thankfully, we’re in a place now where science realises that’s a good thing and the placebo effect is seen as a positive.

Studies are being conducted on the placebo effect alone to see how we can benefit from our own mind over matter approach – something Eastern mystics have known for centuries.

One study tested a migraine medication against a placebo and found that the placebo was 50% as effective as the drug. Researchers speculate that a driving force of the reaction was the simple act of taking a pill.4

To truly get the benefits from psychedelics, you have to take the macrodose approach. When it comes to magic mushrooms, a macrodose is anything from 2g of dried mushrooms upwards – 3.5g would be standard.

Famed psychedelic enthusiast Terrance McKenna talks about 5g’s being the heroic dose that will help you talk to aliens in another dimension… Whether it does or not is up for debate, but it’s definitely not something for a non-seasoned first-timer to try.

Keep in mind that high dose psychedelics aren’t for everyone, and nobody should be pressured into thinking they have to go down that road.

If they chose to, with higher doses, your intention is everything and how you prepare beforehand – such as fasting for three weeks before ayahuasca.

You also need to begin your macrodose deep dive in a safe environment where you won’t be disturbed, can be comfy and have simple things like a toilet close by.

This is called having a good set and setting.5

Ideally, you’ll also have a trip sitter, a seasoned psychedelic user, a psychedelic therapist or a Shaman on hand to guide you through the process.

A higher dose of psychedelics will bring you the potential for ego dissolution, where your sense of self dissolves as your default mode network – DMN – begins to rest.

Your DMN consists of connected areas of your brain thought to be where your sense of self exists.

“Brain imaging studies suggest that when psychedelics are absorbed, they decrease activity in the default mode network. As a result, the sense of self appears to temporarily shut down. The brain states observed show similarities to deep meditative states, in which increased activity occurs in pathways that do not normally communicate. This process has been compared to defragmenting a computer. Following this, it appears that the default mode network becomes more cohesive. We think this could be one of the reasons levels of anxiety and depression appear to reduce.”

When your DMN is shut down like this, it can help you see things in a new light.

It’s amazing what can happen when your ego isn’t getting in the way. You can see the world in a new light and when that happens you can find better ways of doing things.

Which helps you begin to understand things from a transpersonal perspective – a state of consciousness beyond your personal identity.

That can include your approach to relationships, unhealthy beliefs and the way you do your work, Which brings me back to marketing…

Wasn’t this blog meant to be about marketing?

You have an overwhelming sense of community through the psychedelic process, especially when taken in a group setting. Not only to the group you’re with but to your wider friends and family.

And beyond that, to humanity as a whole and to mother earth.

Warning – psychedelics may turn you into a bit of a hippy. They did that to me, but I was on that journey anyway.

It’s the sense of oneness that marketers need to take from psychedelics.

The transpersonal understanding that we need to do good and be the best version of ourselves. If we’re cheating our customers, we’re ultimately cheating ourselves – even if it doesn’t always seem like that from the outset.

Psychedelics are also a powerful tool for creativity, which means they can help find a unique and innovative solution to a work problem.

Steve Jobs was a big fan of using LSD to help his creative process. So much so that LSD inventor, Albert Hofmann, wrote Jobs a letter about it.6

Hello from Albert Hofmann. I understand from media accounts that you feel LSD helped you creatively in your development of Apple Computers and your personal spiritual quest. I’m interested in learning more about how LSD was useful to you.

I hope you will help in the transformation of my problem child into a wonder child.

Apparently, Steve Jobs was a terrible person to work for. This shows psychedelics don’t provide all the answers, but they are a tool for you to find them.

In amongst those answers are universal lessons on how to be a nice person that are applicable in any state of consciousness – altered or not.

Very good advice for any marketer that we can apply in our daily marketing work by thinking along the lines of:

At the end of the day, taking the evil out of marketing isn’t difficult. It’s about removing negative habits and practices.

Psychedelics and good work ethics can make that so much easier to achieve.

4 | The power of the placebo effect | health.harvard.edu

5 | Set and setting: here’s how to prepare your mind & space before using psychedelics | doubleblindmag.com

PrevPreviousHow to use binaural beats to help your meditation

How to use binaural beats to help your meditation

Music is my first love. The way our minds can connect to a bassline, random snare, vocal hook or singalong anthem is truly joyous. Music takes us to heightened states, which include not only ecstasy but also mindfulness – fully committing us to the moment. 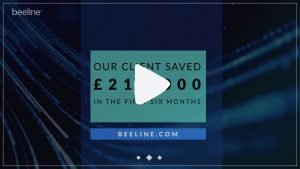 Beeline was in need of a video case study to use in a paid LinkedIn campaign.

How to use intent data to grow ROI and sales

Understanding when a potential customer is ready to buy is crucial to any business – big or small. This blog looks at how you can use intent data to grow your ROI and boost sales.

Lets talk about your goals ツ

This website uses cookies to improve your experience while you navigate through the website. Out of these cookies, the cookies that are categorized as necessary are stored on your browser as they are essential for the working of basic functionalities of the website. We also use third-party cookies that help us analyze and understand how you use this website. These cookies will be stored in your browser only with your consent. You also have the option to opt-out of these cookies. But opting out of some of these cookies may have an effect on your browsing experience.
Necessary Always Enabled
Necessary cookies are absolutely essential for the website to function properly. This category only includes cookies that ensures basic functionalities and security features of the website. These cookies do not store any personal information.
Non-necessary
Any cookies that may not be particularly necessary for the website to function and is used specifically to collect user personal data via analytics, ads, other embedded contents are termed as non-necessary cookies. It is mandatory to procure user consent prior to running these cookies on your website.
SAVE & ACCEPT